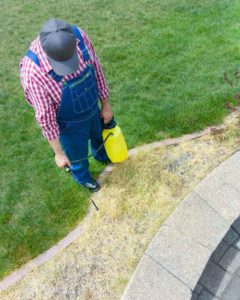 In 1985, the Environmental Protection Agency, labeled Glyphosate, a key chemical used in Roundup, as a class C carcinogen. Roundup is a one Monsanto’s leading products. Monsanto Company is a multinational agrochemical and agricultural biotechnology corporation.

The United States government, as well as Monsanto, knew about the relationship to cancer for over three decades and refused to step forward to inform the public. Instead, the company told the public that Glyphosate and Roundup were safe for public use.

According to Robin Greenwald, one of the environmental attorneys that has dealt with Roundup cases, Monsanto representatives have claimed that the herbicide is “safer than table salt,” and “practically non-toxic.”

For over three decades, the FDA & Monsanto knew about Roundup’s link to cancer and failed to disclose it to the public.

Many lawyers are involved in lawsuits against Monsanto for diseases and deaths caused by their product, Roundup.

Cases are rooted in the lack of information and caution given to the public about the product’s links to cancer.

When tested on animals in the 1980s, Roundup was shown to cause cellular changes within laboratory animals. This was directly linked to the early developmental stages of cancer. Instead of informing the public, Monsanto did everything in their power to cover up the dangers of the product.

Studies testing the harms of glyphosate show high buildup of glyphosate herbicide in mother’s bodies when testing breast milk. In addition, when compared to that of Europeans, Americans were found to have 10 times more glyphosate in their bodies.

Glyphosate is building up in the bodies of its unknowing consumers.

The health implications of such a dangerous chemical has tragic endings as seen by case studies and in the media.

Roundup is used as a weed killer and it is often breathed in by the consumer while using it. Therefore, the consumers are in danger of developing non-Hodgkin’s lymphoma. Roundup is used so excessively that federal scientists have discovered it within the air and rain.

According to Lead Zerbe, a writer for Organic Life, “Roundup doubles your risk of Lymphoma.”

Non-Hodgkin’s lymphoma is a type of cancer that causes enlarged lymph nodes on the neck, under arm, or groin.

Other symptoms include, but are not limited to, fever, night sweats, and weight loss.

Similar to other types of cancer, treatments include chemotherapy, radiation therapy, and stem cell transplants.